Each district of Maizuru City is rich with nature and fascinating historical culture, and various events. Visitors to Maizuru can enjoy the charms of each season here.
*Schedule subject to change without notice

The cherry blossoms of Yoshida, a designated cultural property of Maizuru, are over 400 years old. The blooms drooping over the stone wall resemble a waterfall of cherry blossoms. 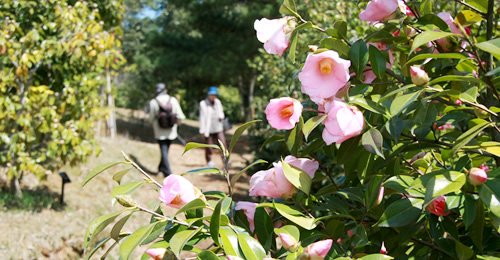 This festival is a camellia exhibition featuring 30,000 colorful camellias of 1,500 different species from around the world.

There is an overwhelmingly number of cherry blossoms along the Yohoro River area in Maizuru. The river area spans a distance of 7 km from the Yohoro water purification plant to Maizuru Bay, and is lined with approximately 1,000 cherry blossom trees.

Many cruise ships call at Maizuru Port every year from spring through autumn. A variety of passenger ships, from high-end smaller sized ships to more affordable mega-ships, enter the port. The port is popular not only with passengers, but also with visitors who come to see the ships.

The Azalea festival is held in Higashi-Maizuru Park. Various events are held while 25,000 azaleas (Maizuru’s city flower) are in bloom.

This is a traditional event that has been held at Matsuno-o Temple since the Edo period. The Nyorai and others perform elegant dances in time with the sound of Etenraku. (Important National Intangible Folk Cultural Asset)

The Maritime Self-Defense Force's Maizuru Regional Corps is an annual event, with various events such as public viewing of escort ships and performances by the Music Corps.

This festival shares the history of the Hosokawa Yusai battle that was fought mainly around Tanabe Castle. Visitors can see a warrior parade, art stalls, and traditional performing arts.

This event involves all of the sake breweries in Tango holding a sake brewing festival all at once, and visitors can enjoy sake and delicious food at each of the breweries.

Maizuru Nature and Cultural Park is one of the most famous hydrangea-viewing spots in Kyoto Prefecture. The colorful blooming hydrangeas spread all over the valley in a masterpiece, resembling a sea of hydrangeas.

Maizuru has three beaches, Kanzaki, Ryuguhama and Nohara, where you can enjoy the beautiful sea side along the Sea of ​​Japan. The sea opening is a ritual where safety in the summer season is prayed for.

Spectators enjoy approximately 5,000 fireworks that color the night sky and the sea surface. On the night before the fireworks display, many people dance to music in the shopping street of Nishi Maizuru District. "Chatta" derives from the local dialect spoken in Maizuru.

This traditional event that has been around for more than 400 years. Local youths throw a small torch into a 16-meter-high larger torch to kick off the heroic festival begins. (Prefecture Registered / City Designated Cultural Property)

The fire festival in Yoshihara District began approximately 300 years ago in an attempt to calm the anger of the deity Kaijin. The 18m tall fish-shaped bamboo structure set alight and rotated in the river is a powerful sight.

This half marathon passes through the beautiful scenery of Maizuru towards the final goal of Akarenga Park. This race is popular for the rare opportunity to run inside the Japan Maritime Self-Defense Force base.
*Image provided

Visitors can enjoy nature of the four seasons at this temple, in addition to the three-storied pagoda (National Important Cultural Property). In particular, the beauty of the autumn scenery and snow- covered scenery is renowned.

Weather conditions permitting (i.e. sharp change in temperature in early morning compared to that of the previous day) a sea of ​​clouds can be seen covering Maizuru Bay from the summit of Gorogatake in the morning.

Yoshiwara Tachifuri is a traditional folk performance put on in the Yoshiwara district of Maizuru. It is a combination of dance, theater, and ritual that closely resembles a martial art demonstration. A series of performers dance in pairs while wielding, spinning, and jumping over their swords and staffs, enacting battle scenes from the siege of Tanabe in 1600. During this conflict, fishermen from the local area helped the gravely outnumbered forces of Hosokawa Yusai, also known as Hosokawa Fujitaka (1534–1610), to defend Tanabe Castle. Records show that the performance has been held in the region since at least the middle of the Edo period (1603–1867).